Artificial Intelligence. The term itself typically conjures up vivid associations in the minds of those encountering it. Depending on their perspective however, these can be very different indeed. To some, it summons images of dystopian hellscapes such as those depicted in the Terminator series of films, complete with autonomous killer robots and Skynet running the planet. While to others, the utopian vision of the progressive world order represented by Star Trek, and one of its characters, Data, comes more readily to mind. To those who actually work with the various facets of this technology however, it is simply seen as another tool to accomplish complex tasks through the aid of computational power and mathematical rigour.

To start off, we need to understand that nowadays, the term is extremely broad. Though its origins stem from the very beginnings of computing and Alan Turing himself, the methods pioneered to try to meet the challenge of the famous “Turing Test”, (where passing would mean a computer would indistinguishably be able masquerade as a human when posed questions), have been applied to a whole range of problems unrelated to the original. So while certainly there are those striving to replicate human thought processes, and perhaps ultimately consciousness within a machine sometime in the murky future, the vast majority of work being done in the field is considerably less like science fiction, and is providing solutions to difficult problems we encounter today.

To help illustrate this, I asked Phil’s Lead Data Scientist, Matthias Schuurmans, if he could cite some practical applications of AI that we see on a daily basis, perhaps without even realizing it. 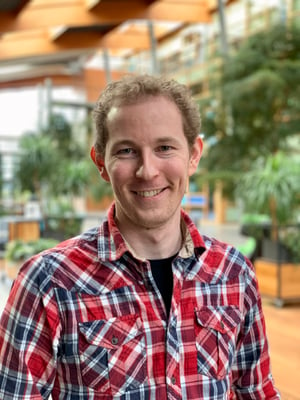 Matthias: Well, everyone has a smartphone in their pocket these days. Face detection in the camera is done using AI, your digital voice assistant utilizes it in terms of its responses, predictive text uses machine learning, and so on… your phone uses a whole bunch of this technology. Another example might be recommendations you get from a search engine. For example, Netflix recommends shows that should appeal to you by way of their personalization algorithms. They put you in a particular bucket based on data they have gathered on your viewing habits, ratings etc. and suggest, because other people who are also in that bucket watch this particular kind of content, that perhaps you might be interested in it as well.

Ok then, well I know there are multiple methods by which AI and machine learning are tackled, but can you tell us briefly how it works at a high level?

Matthias: Well yes, there are different types, but I think the most straight-forward one to explain would be supervised learning. What that is, is basically saying, ok I have some data, and I have a thing I want to predict. So in terms of data in a picture, it could be “Tell me if this is a cat.” Another example would be if I had collected data from a certain metric over time and I want to make a model that’s able to forecast that metric into the future. I have a specific thing in mind I want to predict and I know the historical ground truth.

Ok, but in simple terms, how do you actually do it? What’s involved?

Matthias: A lot of math! In simple terms, I have a whole bunch of different algorithms to try and do this, but all of them work in pretty much the same way: they are going to try to come up with a relationship between what you add as information for features, which are individual measurable properties of what is being observed, and a target or label — “this is a cat”, for example.

Initially a model usually just starts off randomly guessing. It tries to come up with some relation between the features and the target and then compares what it predicted to what is actually the case (ground truth), and it says, “Oh, this was wrong, I’ve got to tweak the relationship a little bit.” And then it tries again… and then it tries again… and every single time it tries again, it makes a tiny modification to the internal relationship it made between the features and the target.

As you try this thousands, millions, and some models even require trillions of times, it acquires a better and better relation between the features and the target, and in the end is able to predict that target quite well.

So when we turn to horticulture, what kinds of problems are being addressed through AI and machine learning?

Matthias: Right now the “Holy Grail” is in yield prediction: trying to come up with how much yield am I going to have somewhere in the near future. If you can accurately predict that, it is extremely valuable.

Here is a yield graph of some Beef tomato crops over time for example. Ask yourself: how would you try make a prediction for this? 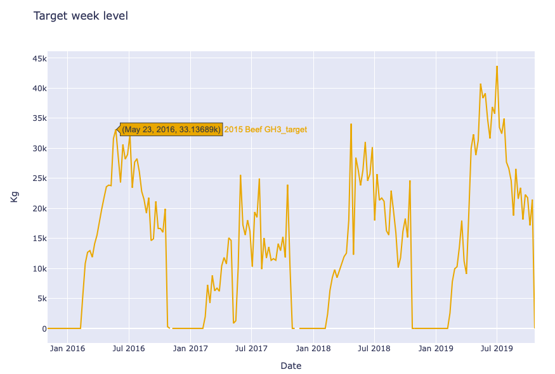 To start, we need to understand why this target is what it is. For example, why did we produce 33.137Kg of tomatoes in the week of May 23rd 2016? It probably had something to do with how much water we had given the plant up to that point, how much CO2 it had received, the fact that it had already grown for a while, the fact that it was the third week of May, among many additional factors. All this information can be represented in features. Just a few rows of a feature matrix (using dummy data) might look something like this:

This is what a model trains on.

Once our model is done training, and assuming our initial dataset was good, we can feed it the same list of features, but for a period that we want to predict. The model then uses the relations it discovered during training to calculate the target for that period. And voila, there’s your prediction!

So while there is a lot of hype out there surrounding AI and machine learning these days, it isn’t some arcane art, but simply the application of mathematics, and the power of computers to perform trillions of calculations — something simply impossible for a human to do given the limitations of our lifespan. And though it isn’t magic, it definitely offers considerable promise in the realm of horticulture: from yield prediction, to pest and disease detection, to autonomous growing and beyond.

Here at Priva’s Horticulture Innovation Lab, our Data Scientists are hard at work on new AI powered solutions to challenges faced within our client’s greenhouses. Why not sign up for our Beta Program and see what the cutting edge has to offer for yourself!

Phil wants to connect with the brilliant minds of our clients and businesses that support them, and beyond.

Are you our next beta client?

Phil wants to connect with the brilliant minds of our clients and businesses that support them, and beyond.

See our products in action!

Priva is proud to introduce you to Phil. Phil combines Priva’s 60 years of experience, the world’s largest greenhouse client base and the potential of data-driven services with a science and AI core.